We've been entrusted with this land 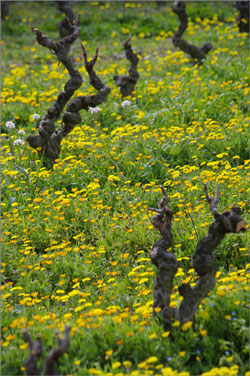 The vineyard of Le Pech is turned towards the South (the better to admire the Pyrenees…), all in one piece in front of the family house. Soils from Tertiary limestones (Bartonian), composed of sandstone and marl, are perfectly suited to the cultivation of the vine.

This terroir of Minervois named « les Mourels » is one of the earliest and warmest of the Minervois, between the Causses and the Serre d'Oupia which rises to nearly 300 meters.

For generations, we have chosen to accompany exclusively Mediterranean varieties of grapes... these are vines that flirt drought because rainfall is low (450 mm/year) and temperatures are very high in summer.

The vineyard was planted between the scrubland, in places where rooting of the vine was possible. Thus, of the 40 hectares of the domain, the vineyard covers 28 hectares including 19 in AOC Minervois (with yields of 20-40 hl/ha) consisting of:

According to geomorphology, vine varieties were choosen to search for the best expression of the terroir. Each plot, according to his character, delivers the force of this land. It gives us fruits that speak mostly of the air: Cers, the cold, dry and often so violent northwest wind that dominates, while Marin, the Mediterranean wind, brings the humidity of shorelines that helps the Mourvèdre to mature so well…

Day after day, we accompany this vineyard by seeking the finest and most typical expression that this land can give to each of these varieties.